Click the logo below to watch BAJA on your favorite platform.

ALSO ON THESE PLATFORMS

There is something to be said for the familiar. The reason you re-read that book, re-watch a movie millions of times, or revisit your favorite episodes of a show is because you know the laughs will leave you howling or when the drama will make you cry and those emotional highs comfort you like a cozy blanket. That is not to discount originality, of course, but retelling a familiar story well is better than an original tale told poorly. One doesn’t need to know the specific details of the new comedic road trip movie Baja before watching it in order for that snuggly warmth to pervade every frame.

…Jake Thomas, Chris Brochu, Michelle DeShon, Arienne Mandi, and Zoe Corraface are all great together. Individually each of them is fine and likable, but their group dynamic as friends feels so genuine and true that you are rooting for all of them.

The characters are really likable, the actors’ chemistry is off the charts, and the cordial ambiance invites the viewer to lay back and have a good time.

Since the days of Frankie and Annette, low-budget filmmakers have understood that the dopiest stories sell, so long as the location’s sunny and the characters sincere. Writer-director Tony Vidal’s youth comedy “Baja”  …(has) a genially retro vibe and a breezy beach atmosphere. 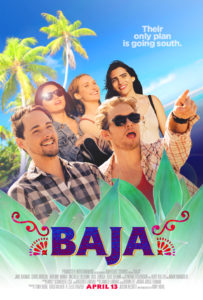 One of our great blessings in creating BAJA, was t

"One thing is for sure, the magic and mystery of M

Reposted from @free.byrd.movie you are brave; ever

Something miraculous happened to those five young

What is that mysterious light in the sky? Find out

THE MUSIC OF BAJA

This site uses cookies. By continuing to browse the site, you are agreeing to our use of cookies.

We may request cookies to be set on your device. We use cookies to let us know when you visit our websites, how you interact with us, to enrich your user experience, and to customize your relationship with our website.

Click on the different category headings to find out more. You can also change some of your preferences. Note that blocking some types of cookies may impact your experience on our websites and the services we are able to offer.

These cookies are strictly necessary to provide you with services available through our website and to use some of its features.

Because these cookies are strictly necessary to deliver the website, refusing them will have impact how our site functions. You always can block or delete cookies by changing your browser settings and force blocking all cookies on this website. But this will always prompt you to accept/refuse cookies when revisiting our site.

We fully respect if you want to refuse cookies but to avoid asking you again and again kindly allow us to store a cookie for that. You are free to opt out any time or opt in for other cookies to get a better experience. If you refuse cookies we will remove all set cookies in our domain.

We provide you with a list of stored cookies on your computer in our domain so you can check what we stored. Due to security reasons we are not able to show or modify cookies from other domains. You can check these in your browser security settings.

These cookies collect information that is used either in aggregate form to help us understand how our website is being used or how effective our marketing campaigns are, or to help us customize our website and application for you in order to enhance your experience.

If you do not want that we track your visit to our site you can disable tracking in your browser here:

We also use different external services like Google Webfonts, Google Maps, and external Video providers. Since these providers may collect personal data like your IP address we allow you to block them here. Please be aware that this might heavily reduce the functionality and appearance of our site. Changes will take effect once you reload the page.

The following cookies are also needed - You can choose if you want to allow them: